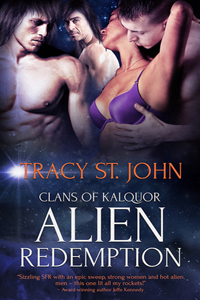 Imdiko Conyod’s clanmates Dramok Erybet and Nobek Sletran are home from the war. However, he no longer knows these men. Changed by the horrors they’ve seen and done, they are very different people. How can he allow them to clan the traumatized Earther Rachel Hicks, whom he’s come to love so deeply? And how can he not clan her when she’s the only thing right in his life?

Erybet and Sletran keep secret the truth of the terrible crime they committed on the Earther colony of New Bethlehem. The damaged clan tries to pick up the pieces of their shattered lives with Rachel, a woman as passionate as any three men could wish for. But the murders of other Earther women mean Erybet and Sletran must face the monstrous act they thought they left behind. Someone calling himself the Beast of New Bethlehem is murdering Earther women…and the killer may be closer to the clan’s beloved Rachel than anyone suspects.