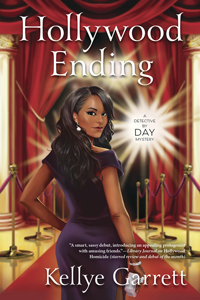 And the award goes to…

…Dayna Anderson, the semi-famous actress turned PI who steps up her sleuthing swagger in this follow-up to breakout hit Hollywood Homicide, winner of the Lefty Award and the Agatha Award for Best First Novel!

Tinseltown’s awards season is in full swing, and everyone is obsessed with dressing up, scoring free swag, and getting invited to the biggest awards shows of the year. But when celebrity publicist Lyla Davis is killed, the festive mood comes to an abrupt halt.

Apprentice private eye Dayna Anderson thinks she’s uncovered the killer. Unfortunately, what starts as an open-and-shut case turns out to be anything but. Diving deeper into the investigation, Dayna gets a backstage look at gossip blogging, Hollywood royalty, and one of entertainment’s most respected awards shows—all while trying to avoid her own Hollywood ending.

Named Best of 2018 by Suspense Magazine

“Garrett, who wrote for TV’s Cold Case, brings a smart insider’s view of contemporary Hollywood to this lighthearted series.”—Publishers Weekly

“Day’s funny and determined, the sort of woman who really WOULD make a wisecrack when faced with danger.”—Donna Andrews, New York Times bestselling author of the Meg Langslow series

“Fasten your seatbelts. A star is born!”—Nancy Martin, author of the Blackbird Sisters mysteries