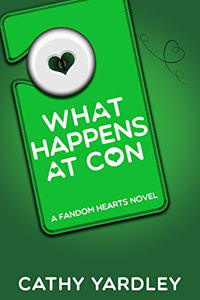 She’s burned out from dealing with sexist crap, and with the hell of her grad program looming ahead of her, she just wants one night of nameless cosplay masquerade sex to blow off some steam. But even that goes wrong when the masks come off….

Abraham wants more than he ever expected….

He’s usually been a short-term guy, but one night with Ani opens his eyes. He’s shocked when she’s the one to pull away, saying that with everything she’s got going on, she has neither the time nor energy for a relationship.

Can this tough guy prove he has what it takes to care?

She doesn’t need a defender: She needs a supporter, someone to help her pick up the slack in her life. He’s been a fighter, not a nurturer, but he’ll do whatever it takes to show her that what happened at Con shouldn’t just stay at Con….